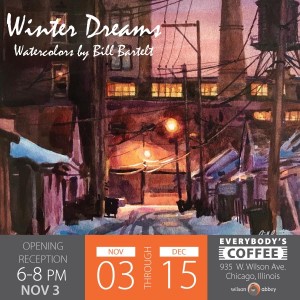 Twilight comes early to the alleys of Chicago in November and December. Often we fall into a state of ennui, somewhere between sleep and wakefulness, caught up in Winter Dreams. Bill Bartelt’s watercolors embodies this mood, the shadows cast by streetlights, a rainy afternoon on Michigan Avenue, the muted colors of late autumn. Chicago on the verge, seasons of change.

Bartelt keeps a studio in the Ravenswood neighborhood, where he paints, exhibits, and teaches watercolor painting. He is part of the annual Ravenswood ArtWalk. He grew up in Joliet, Illinois where he was drawn to railroad tracks, trains and bridges, subject matter that has stayed with him. He studied watercolor painting with the master Irving Shapiro at the American Academy of Art, and during his career as an art director in the entertainment industry, MGM asked him to create the paintings for Minnie Driver in the film Return to Me.  Among his favorite subjects today are still the mighty structures that give Chicago its incomparable look and personality. His years walking his late dog Sylvie instilled in him an affection for the quiet streets and alleyways of his neighborhood, and finds these intimate subjects a restorative contrast to the muscular roar of the city. More info about Bill and his art at: www.billbartelt.com